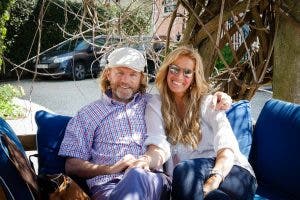 James Stuart and his partner Ellie’s respective restaurants, El Jardín del Califa and Corredera 55, are ranked the number one and two best places to eat in the increasingly popular Cadiz hotspot.

James told the Olive Press: “It’s great to be voted as the best by customers, because of course, that’s who’s opinion matters most.”

And the pair insist there’s no competition between them.

“We are a collaborative couple,” explains James, who owns the principal share in both eateries, “We both make sure we look after our staff and manage strong teams, which is essential for the restaurant business.”

Ellie used to own a Michelin star restaurant in her native Scotland and the Jardin del Califa has been in the Michelin Red Guide for the last 10 years.

“The customer is king these days so we are very happy to have got the balance right in both restaurants”.

The Califa offers an eastern Mediterranean-Moroccan fusion, while nearby Corredera 55 treats diners to traditional Spanish dishes with a modern European twist.