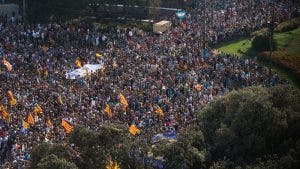 THE death toll from the Barcelona terror attacks rose to 16 on Sunday after a German woman died from her injuries.

The deadly attacks in Las Ramblas and Cambrils left 120 injured, 24 of whom remain in hospital, including five in critical condition.

The woman is believed to have been hit by the van which first ploughed through crowds on August 17.

It came a day after some 500,000 people marched in Barcelona to send a signal of unity under the slogan ‘no tinc por’ (I am not afraid).

Police, emergency services and taxi drivers all led the parade.

It was the first time a Spanish monarch had joined a march since the 1970s.

Rajoy called for unity in lieu of the upcoming penned independence referendum on October 1.

However pro-independence supporters sported the Catalan flag and booed the PM and Felipe.

Alex Trelinski - 7 Feb, 2023 @ 18:50
A new art gallery has opened in Valencia named after a modern impressionist artist with the aim of selling affordable works that are very...