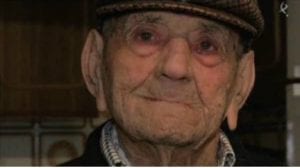 A 112-YEAR-OLD Spaniard has become the oldest man in the world.

The grandfather of 15 was widowed in 1988, and currently lives with his eldest daughter, María Antonia, 81.

The centenarian from Badajoz puts his longevity down to ‘good genes’, ‘hard work’ and a varied diet of homegrown vegetables.

He also drinks one glass of ‘good red wine’ per day.

He was ten years old when the First World War broke out and in the 1920s he fought against the Berbers in Morocco during the Rif War between Spain and its North African neighbour.

His daily food intake includes milk and madeleines for breakfast with an Actimel, meat, fish or stew for lunch.

He has yoghurt for an afternoon snack and special cereal with milk for dinner.