WE are nearing the end of one of the most spectacular walks in Spain when we finally bump into another human being. It’s midsummer and over the previous three hours the only other signs of life have had horns or wings – cows, goats and a pair of screeching eagles. 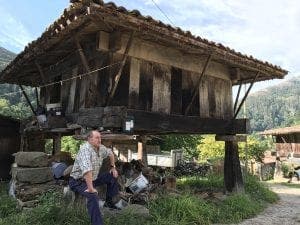 Well-marked out and well-promoted, the circular route takes you through a breathtaking gorge of virgin woodland, then up and up to high mountain pastures with incredible views. So where is everyone? Well, this is Asturias and, crucially, not the celebrated Picos de Europa or the nearby coastline, which in August does get busy, thanks to half of Madrid being on holiday not to mention the rest of Europe. 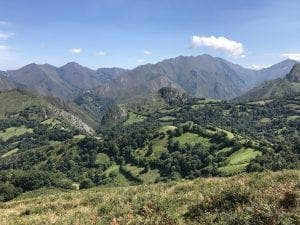 Our walk, near Fuensanta where the celebrated bottled water comes from, is halfway between the sea and the soaring inland picos and close to a couple of lesser-known Natural Parks (Asturias has an incredible 24 in total). About 25 minutes from the city of Oviedo and 20 minutes to the coast, for most of the year this is a spot where you will hardly ever see a tourist.

The sole traveller we meet is clearly intrigued to see us and stops in his stride to ask where we’re headed… and why? He is soon our unofficial tour guide, listing other good walks nearby and insisting we make a small detour to the 13th-century tower that sits astride the river 600 metres upstream. 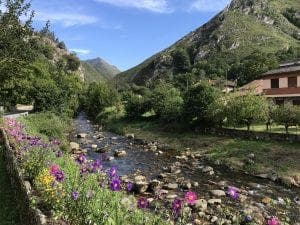 He’s in his early 60s and has the healthy pallor of most of the locals you meet in these parts. He is also engaging and our conversation becomes a history lesson on Asturias – it was a kingdom many centuries before Ferdinand and Isabella created Spain and it was where the reconquest against the Moors began – until the discussion turns to corruption in Spain … Our informed guide turns out to be a policeman – the ‘captain’, no less, of nearby Gijon’s Guardia Civil. Cultured and educated, he well sums up a week’s holiday in this particularly unspoilt, civilised part of the peninsula. 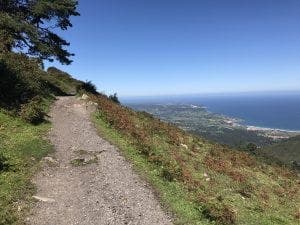 Asturias is the polar opposite of the Costa del Sol or the Costa Blanca. Like a microcosm of Spain it has a bit of everything, from snow-capped mountains to sweeping beaches and from simple local ventas to grand upmarket eateries, along with swathes of wild virgin countryside still inhabited by bears and wolves. Known as ‘green Spain’ (a title which neighbouring Cantabria, Galicia and the Basque Region also claim) it’s not hard to see why as you fly into little-known Asturias airport.

Looking more like the fjords of Norway than a Spanish coastal region, forested hillsides swoop down to apple orchards and fields of hay grazed by herds of cows. This is a pastoral paradise and perfect walking terrain, even in August when summer daytime temperatures average 23 degrees, only hitting 30 on a very hot day. 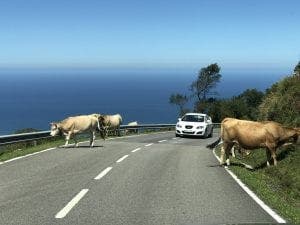 Sure, you will have to contend with an average of 10 rainy days in August (with 12 in September and 11 in June and July), but these days are mostly overcast, not wet from dawn till dusk, meaning you can be out and about all day with none of southern Spain’s siesta lark!

We were looking for the best place in Spain to get away from Andalucia’s stifling midsummer heat but still be in shorts and t-shirts, and to get in some decent walking, a day or two on the beach and a bit of cultural stuff. And, above all, we had come to eat the region’s rated food and sample its famous cider, which we had enjoyed on various trips to Asturias in our 30s, in the years before our two kids were born.

Centering our holiday around a booking at the region’s most famous restaurant – Casa Marcial, in Arriondas, which we had also visited a couple of times back then – we packed the kids off to the grandparents in the UK and took a very reasonably-priced flight from Malaga via airline Volotea, which flies a couple of days a week. 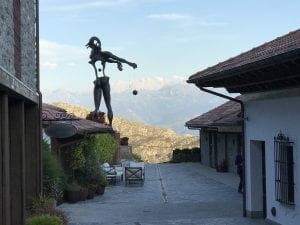 Everything ran smoothly and by 10pm we were sitting down to dinner at our first port of call, a fantastic small boutique hotel called el Gran Sueno (www.elgransueno. es). With a plate of amazing ham, a simple gazpacho and a fabulous flinty ‘albarino’ white wine called Siete Vidas from nearby, what more could you want? As we’d arrived at night, we’d had no hint of the dramatic scenery awaiting us at breakfast, set up in the charming garden below our room. The view went on forever, stretching to the distant soaring picos nearly an hour away by car.

At closer range we marvelled at the vernacular architecture of the tiny village of Pintueles and its classic horreo (grain store), unusual as it was charming. Our host Dave Haxby, originally from Brighton, moved here with his Asturian boyfriend Javier a couple of years ago. They couldn’t have made us feel more at home, plying us with suggestions for walks and places to eat. One stroll began literally from the doorstep and took us into the nearby hills along ancient tracks and (supposedly) to lunch in a restaurant halfway around.

Sadly, it was closed (well, it was a Monday, albeit in August) but obligingly our hosts came to our rescue, booking us a late lunch at a nearby hotel in Torazu. Their best advice by far, though, was to steer clear of the famous walks of the Picos de Europa which got its name from the conquistadores who saw its peaks before any other land on the way back from the New World. (We had, anyway, visited Fuente De and Cabrales gorge before.) But they talked of hour-long waits for the cable car up, hundreds of people on the paths and the need to get up at 6am, which was the clincher, and we opted to stay nearby. But we were in no way being shortchanged, with our already-mentioned hike around Fuensanta and another adventure into the wonderfully-named Ponga Natural Park.

This day out took us up a green valley to the village of Espinaredo, where we had a simple lunch and were fascinated by what is supposedly the largest concentration of horreos in Asturias, some 700 in total dating back to 1548. From here, we walked part of the interprovincial GR109 footpath up into the hills, past the cute hamlet of Omedal and up to a ridge with one of the best views in Christendom, where we sat and devoured a perfect packed lunch. On the way back we were guided to the town of Infiesto, where an ancient wooden-clad bodega sold dozens of wines by the glass. Just what the doctor ordered. 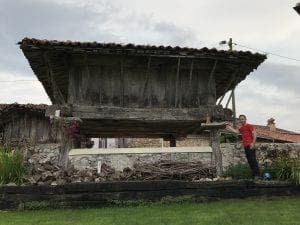 Our next port of call was only 20 minutes by car through the Sierra del Sueve towards Arriondas, where we had our much-anticipated restaurant reservation. We tried out two different hotels, both equally amazing: Palacio de Cutre (www. palaciodecutre.com), where we ate on one of the most spellbinding restaurant terraces in Spain and woke up to deer in the garden; and the five star Puebloastur (www.puebloastur.com), which is easily one of Spain’s best rural hotels. 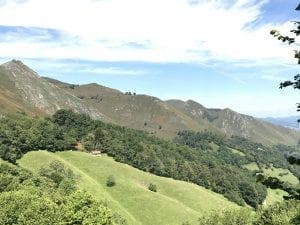 In contrast, the last few days of our trip were spent on the coast near Lastres, where we planned to eat some decent seafood and visit some beaches. In the end, the weather conspired against us and with sunbathing off the schedule, we took some walks – along the coast from Playa la Griega in Colunga to the small village of La Isla, and inland from the remarkable Fito viewing point up to the nearby peak of Pienzu.

This gave us a great opportunity to see how unspoilt the coastline is in Asturias and, in particular, to enjoy its cuisine, with restaurant Gueyu Mar in Playa de Vega a particularly standout place for seafood. Best of all was holing up and relaxing in our final hotel, the Palacio de Luces (www.palaciodeluces.com), a luxurious Relais & Châteaux affair with wonderful suites maximising on the views and a restaurant that puts just about every other hotel establishment I have eaten in to shame.

Following the advice of friendly manageress Maria Dolores to ‘eat in’, even when there were so many good local options, was a masterstroke and we were soon tucking into an incredible ‘salpicon’ of local lobster and langoustines and a tartare of avocado and tuna with mustard, passion fruit, tomato and chives. The ravioli of ‘colmenillas’ mush- rooms in the juice of free range chicken was superb as was the red mullet with apple sauce. It perfectly set up the last day of our holiday, spent sightseeing around the town of Aviles, the smallest of the three cities of Asturias now famous for its Oscar Niemeyer cultural centre, a much-needed tourist magnet for the city. Having already visited the capital of Oviedo (a historic masterpiece) on many occasions, and the sea-side city of Gijon which is one of the definitive party capitals of Spain, it was good to spend time in more laid-back Aviles, which has a charming historic quarter, no shortage of places for lunch, before heading for the airport just 15 minutes away. 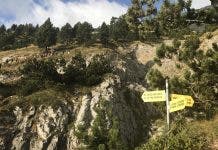 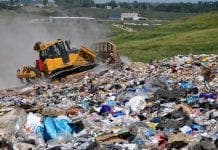