UB40’s Brian Travers is set to host an exclusive exhibition of his own art work in Marbella next week.

The musical legend will be presenting his best works at the Siroko Beach on September 26 in association with The Finance Bureau and Wow Organic.

Cava and canapes will be served while guests will have the chance to meet the man himself.

Travers, 58, previously said of his work: “I’ve been touring for so long I just haven’t had the time to paint.

“Dave then asked me to do an exhibition so I sat down to work in a little Cotteridge studio. 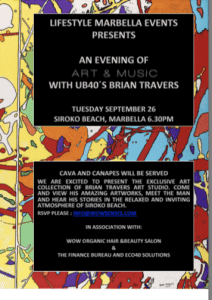 “I’m calling this an abstract art show for the comic book generation.

“I’ve been living with these works for nine months in between gigs – and it’s great to finally see them on the wall.

UB40, behind hits including Red Red Wine and Kingston Town, have sold 120 million records since they made their live debut at Kings Heath’s Hare & Hounds pub in 1979.

The event begins at 6.30pm next Tuesday.