A MALLORCA engineer is one of 10 people handpicked to sail in one of the world’s most extreme sporting events.

Ugo Fonollá, 25, will circumnavigate the globe in the Volvo Ocean Race from October 22.

Fonolia, a member of Palma’s Club Nautico, was bought a camera for his birthday by his parents and used it to film himself at sea.

Since then, he has filmed Palma’s Copa Del Rey and Palma Vela regatta before applying to become an onboard reporter for Volvo Ocean Race.

“It’s a work of pure journalism,” he said. “To communicate what happens in the boat. I will have to send a text of 300 words and a video of two minutes with interviews, action and the day-to-day life in the boat.”

The race will take in Alicante, Melbourne, Hong Kong, Auckland, Newport, Cardiff and Gothenburg among others. 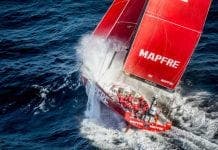 Isha Sesay - 25 Sep, 2020 @ 16:15
It is believed that the group had illegally entered the farm to steal marijuana that was grown on the land