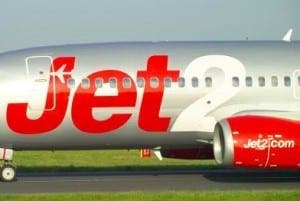 PASSENGERS have described the horrific moment a pensioner died on a flight from Spain to the UK.

The holidaymakers said a medical team desperately tried to resuscitate the 81-year-old in vain as his horrified wife looked on.

The witnesses were travelling on a Jet2 flight from Tenerife to Newcastle when he suddenly died mid-air.

A medical team tried to resuscitate him in his seat on Sunday night flight, but failed, causing it to be diverted to Cork in Ireland, reports the Chronicle Live .

Wayne Clarke, 47, from Kenton, was sitting towards the middle of the plane as the tragedy unfolded.

He said: “From what people were saying this man must have taken ill in Tenerife because he had medical staff on the plane with him.

“He was sat at the front with them and his wife.”

Wayne said the flight was about an hour away from Newcastle when the man’s condition deteriorated and medics tried to resuscitate him.

“He was in his seat and I could see them working on him, doing chest compressions.

“The staff told us the plane would have to be diverted because of a medical emergency.

“I was absolutely devastated. I wasn’t bothered about the delay but my heart went out to the poor woman who had lost her husband. What a way for it to happen.”

Passenger Vicki Jackman said: “I was near the back of the plane and could see that a passenger was receiving CPR at the front.

“The medics and police came onto the plane at Cork and we all got off using the back stairs.

“The crew and the captain were outstanding.”

A Jet2 spokesperson said: “We can confirm that a customer passed away on our Tenerife to Newcastle flight, despite our crew diverting to Cork Airport to seek emergency medical assistance.

“We extend our sincere condolences to his family at this very sad time.”

A spokesperson for Cork Airport said: “Management and staff extend our deepest sympathy to the spouse and family of the gentleman that passed away en route from Tenerife to Newcastle last Sunday night.

“We would like to pay tribute to the captain and crew on board the aircraft and our own first responders and local medical teams that assisted when the aircraft landed at Cork Airport for their professionalism in such tragic circumstances.

“All normal protocols were observed in such circumstances and passengers were accommodated in the Departures Lounge at Cork Airport and offered refreshments while a replacement aircraft flew to Cork to bring passengers on the final leg of their journey home to Newcastle.”