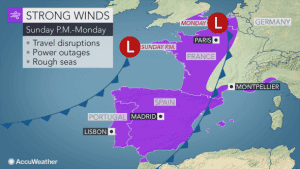 A HUGE storm is set to hit Spain and western Europe later Sunday into Monday with winds strong enough to cause power outages, travel disruptions and localized damage.

The storm, named Cyclone Ana by Spanish weather agency AEMET, will sweep in from the Atlantic Ocean to affect a large area of western Europe.

It is the first time AEMET has named a storm.

Rainfall in areas of the mainland is forecast to exceed 100 millimetres per hour.

It is expected to be more dispersed and weaker along the Valencia and Murcia coasts and in the Balearics.

Winds are predicted to be up to 100 kilometres per hour, and these are due to affect the Balearics, producing very rough coastal conditions in parts of the islands.

Many communities will be subject to wind gusts between 70 and 95 km/h (45 and 60 mph). These winds are strong enough to cause tree damage and power outages.

Christmas lawn decorations that are not properly secured can get tossed around and damaged.

Disruptions to rail and airline travel may occur. Ferry services may also be impacted as the winds stir rough seas. Drivers of high-profile vehicles should prepare for dangerous crosswinds.

The winds will sweep from west to east across the Iberian Peninsula and France later Sunday into Monday.

The strongest winds are expected on Sunday evening in Porto, Portugal; overnight Sunday in Lisbon, Portugal, and Madrid; on Monday morning in Montpellier, France; and on Monday in Paris.

The winds will combine with the rain being produced by the storm to reduce visibility for motorists further. Those traveling by foot will find it difficult to hold onto umbrellas.

Motorists may face standing water and a heightened risk for hydroplaning where the rain pours down heavily.

Across the northwestern Iberian Peninsula, the heavy rain will commence well ahead of the strongest wind’s arrival and may trigger flash flooding.

“The greatest concern for flooding will be across northwestern Spain and northern Portugal, where there can be widespread rainfall totals of 2-4 inches with locally higher amounts from Sunday into Sunday evening,” AccuWeather Meteorologist Brett Rathbun said.

“In addition to the flooding, mudslides may result.”

Residents in Porto, Portugal, and Vigo, Spain, should prepare for low-lying and poor drainage areas to become inundated with flood waters quickly.

Streams may become swift moving and may overflow their banks.

Drier and calmer weather will gradually build across the Iberian Peninsula and France for Tuesday.

Storms that follow later in the week may also impact the Iberian Peninsula.