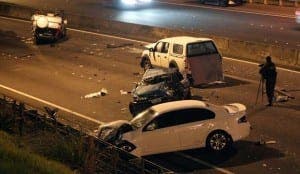 THE areas in Spain which had the most traffic incidents last year have been revealed.

There were 1.91 million minor traffic accidents in the country last year, an annual increase of 3.14% and the highest amount since 2010, according to TIREA.

Malaga province had the fifth highest number of minor accidents – meaning there were no serious injuries – just after Madrid, Barcelona, Valencia and Sevilla respectively.

Mondays and Fridays saw the most collisions, with an average of 270 on Mondays and 265 on Fridays.

Sundays had the least amount of collisions with an average of 122.

The number of accidents only fell in Melilla (-5.87%) and in three of the 17 autonomous communities.

The most populated autonomous communities naturally had the highest number of accidents in absolute terms.

The picture changes if the number of accidents per 100,000 inhabitants is analyzed.

The most problematic moment of the year was June, when there were 176,619 crashes without injuries.

Each month there were 159,224 minor traffic accidents in Spain. This figure exceeds the historical average available for the last two decades.