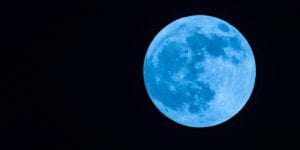 The second supermoon of the year will take place on Wednesday in a rare Lunar Trifecta that will not occur for another 150 years.

The trifecta means it will be a Blue Moon, Blood Moon and a lunar eclipse all at the same time.

A Blue Moon is when two full moons happen in the same calendar month; lunar eclipses occur when the moon passes into the Earth’s shadow; and supermoons happen when the moon’s perigee — its closest approach to Earth in a single orbit — coincides with a full moon.

Tomorrow night, the supermoon also happens to be the same day as the lunar eclipse.

It means it will be a Super Blue Blood Moon.

In Spain, this supermoon can be seen ‘without any problem’ on the night of the 30 to 31, according to scientist Antonio Pérez Verde, although the eclipse will not be visible as it will occur at 2.30 pm on Wednesday.

While the Moon is in the shadow of the Earth, it will take on a reddish hue, known as the Blood Moon.

For observers in North America, Alaska or Hawaii, the eclipse will be visible before dawn on January 31.

For those in the Middle East, Asia, eastern Russia, Australia and New Zealand, the ‘super blue blood moon’ can be seen during the moonrise on the morning of the 31st.