SPAIN will reclaim an island from France next week, but there will be no shots fired.

In fact in six months’ time, Spain will give the 3,000sqm territory back to France.

It’s a tradition that has lasted some 350 years.

Pheasant Island, wedged between France and Spain on the river Bidassoa, sits in an estuary near the French resort Hendaye and the Spanish town Hondarriba.

The island is uninhabited and its only man-made feature is an old monument which pays tribute to a historic event that happened in 1659.

France and Spain were negotiating their end of war terms on the island as it was considered neutral territory.

Wooden bridges were built from each side and the armies of both countries stood nervously by as the Treaty of the Pyrenees was signed.

The agreement was forged with a marriage between King Louis XIV and the daughter of Spain’s King Philip IV.

The island, it was decided, would be shared between the two powers, with Spain having it from February 1 to July 31, and France for the following six months.

The joint sovereignty is known as a condominium, and Faisans Island – as it is called in France – is one of the oldest in existence.

The territory is just over 200m long and 40m wide.

Only on very rare occasions is the public invited to visit on heritage open days.

The island is now being eroded with little political will to pay for defences to protect it – it has lost nearly half of its size over the centuries. 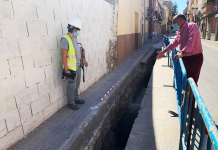