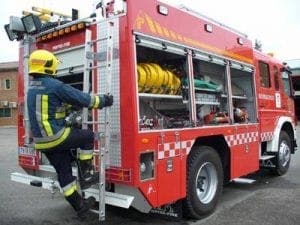 FIREFIGHTERS in Malaga have been banned from using potentially life-saving equipment because they paid for it out of their own pocket.

It comes after five firemen were forced to buy their own protective legwear, or ‘zahones’, which protect their thighs when operating chainsaws, due to a lack of equipment.

It reads: “The use of any equipment considered as Individual Protection Equipment that is not supplied or controlled by the service is strictly prohibited.”

It comes after an inspection in November urged the Malaga bomberos service to provide workers with the right material to handle chainsaws.

Firefighters are warned that if equipment without the control of the company is used, they will be ‘usurping’ the obligations of the administration.

The warning comes despite the fact that the firefighting body has not yet complied with the requirement of the Labor Inspection in November.

Anthony Piovesan - 27 Sep, 2022 @ 15:50
SPAIN is not typically a hotbed for cricket, but the country’s national team has this month come out and swung the sport in the...