AN incest map has revealed where in Europe you can still legally have sex with your siblings. 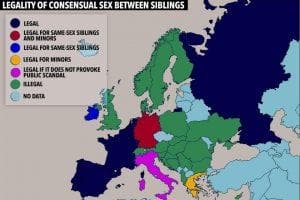 In the UK, incest is against the law under terms of the Sexual Offences Act 2003.

The map was created on mapchart.net and shared on Reddit.

Consensual incest is fully legal in Spain, Russia, and is not strictly prohibited under Portuguese law.

There are also now laws against the practices in France, Belgium and Luxembourg.

In Italy, incest is illegal only if it provokes public scandal – when it can suddenly become punishable from two to eight years in jail.

It’s also legal for people in the Netherlands, but they cannot marry.

In Greece, incest is outlawed for adults, but there is nothing to stop minors.