POLICE in the UK have launched another appeal for a British boy who was abducted by his mother on the Costa del Sol four months ago.

Alex Batty, who turns 12 today, had flown out on a pre-agreed trip with Melanie Batty, 37, and David Batty, 58, for a week-long stay in Benahavis.

The trio, however, never returned as planned on October 8.

The grandmother of Alex has said her daughter and ex-husband have taken him to live an ‘alternative lifestyle’ abroad.

Police continue to be concerned for the welfare of Alex after an investigation revealed all three may have tried to sail on the same date from Malaga to Melilla on the Moroccan border.

Alex’s guardian, grandmother Susan Caruana, 62, says her daughter and ex-husband previously lived on a commune in Morocco with Alex in 2014 as part of an ‘alternative lifestyle’, which she believes lies behind the youngster’s disappearance.

She said: “On the Sunday, they were due back in the afternoon and my husband was going to go and pick them up. I got this message on Facebook and it was a YouTube video of the three of them.

“Alex said it was a million times better being with his mum and granddad. Obviously it hurt me a bit but then my other concerns kicked in.

“The reason I believe they have done this is because basically my lifestyle, my belief systems, are not what they agree with – just simply living day to day, how normal people do. 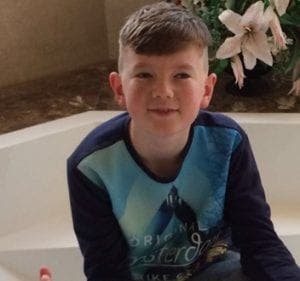 “They didn’t want him to go to school, they don’t believe in mainstream school.”

She added: “I just want to say to my grandson Alex, I love you so much and please, please just get in contact.

“We always did something nice with him on his birthday. We’d have a party or go bowling with his friends, his cousins or we’ve gone trampolining.

“He loved his birthdays and Christmas. I just hope they do something nice with him today.”

Both Miss Batty – who does not have parental guardianship – and Mr Batty are wanted by police in connection with Alex’s abduction.

Detective Sergeant Pete Morley, of Greater Manchester Police, said: “I would implore any of Melanie’s or David’s friends, who might have heard from them, to please contact police immediately. Alex’s friends may have also heard from him.

“I understand this is an emotive situation but ultimately Alex should be at home in Oldham and there are genuine concerns about his welfare.

“He has been missing out on school and we don’t know how the family are funding their lifestyle abroad.”