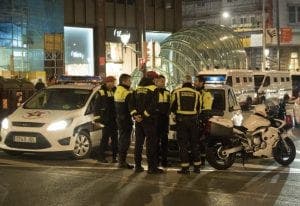 A POLICE officer has been killed in Spain during an organised fight between supporters of two rival teams.

The planned brawl took place last night ahead of the Europa League match between Atletico Bilbao and Spartak Moscow.

Policeman Inocencio Arias García suffered a heart attack after a flare was thrown in his direction during clashes between rival fans at San Mames.

A minute’s silence will be held before all matches in Spain this weekend in his memory.

The Spanish football federation said: “The Royal Spanish Football Federation wishes to convey its deepest condolences to the relatives and close friends of Inocencio A. García, a native of Ermua (Bizkaia), who belonged to the ninth promotion of the Ertzaintza (Basque police force).

“The ertzaina died at Basurto Hospital after suffering a heart attack during the clashes that occurred near the San Mames stadium before the Europa League match between Athletic Bilbao and Spartak Moscow.

“The agent collapsed during the police intervention that took place when the fans of both teams faced each other in the esplanade of the stadium of San Mames, and moments after a flare dropped by a Russian fan fell beside him.

“The Royal Spanish Football Federation wants to express its most resounding condemnation of all kinds of violent demonstrations by groups of fans who use sporting events to provoke incidents and riots. The Royal Spanish Football Federation recommends a minute of silence for all football stadiums in which official competitions are held during the next weekend day in memory of the deceased ertzaina.”

Fearing violent outbreaks, Police escorted Spartak fans into the stadium but a group of them allegedly started lighting fireworks and throwing flares at rival supporters and police.

A brawl broke out, leading to five arrests.

Spartak won the second leg 2-1 but Bilbao held on for a 4-3 aggregate win to reach the last 16.

UEFA said: “We strongly condemns the violent clashes which occurred in Bilbao. We are in contact with local authorities to obtain further information on these incidents.’”

Russia will host the World Cup this year and local authorities are putting strict security procedures in place.