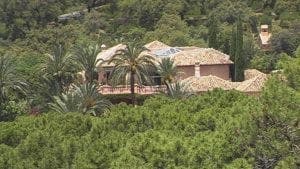 Julio Iglesias has put his extravagant mansion on the market for a whopping €145 million.

The enormous finca, called Las Cuatro Lunas, spans across not one but two borders – Ojén and Marbella – and boasts grounds of 45 hectares, which is equivalent to around 55 football pitches.

As access to the house is particularly complicated, Iglesias requested for the Junta to regulate the lanes around the site in order to make entering the property easier.

However, the public body allegedly ignored the requests, leading the artist to sell it through various estate agencies.

Although the extortionate price means the finca will be just a dream for many looking for property on the Costa del Sol, it seems the palatial pad is well worth the cash.

The main house features a staggering 12 bedrooms, eight bathrooms, six garages, a recording studio, a pool and a wine cellar which can hold up to 2,000 bottles of the finest Rioja.

And that’s just one of the homes.

Iglesias is the most commercially successful European singer in the world and one of the top ten record sellers in music history, having sold more than 300 million records worldwide in 14 languages.

In 2012 the singer was left devastated after forest fires destroyed part of the grounds and killed the family’s beloved dog.

Back in perfect condition again, the property is actually owned by Miranda Rijnsburger, Iglesias’s wife and the mother of five of his nine children.