NETFLIX’S latest horror film, directed by a Spanish director, is so terrifying people cannot watch it until the end.

The most spine-chilling part is that it is based on real events.

Spanish language film, Veronica, tells the story of a teenage girl who attempts to call upon her dead father by using a Ouija board with her siblings.

After passing out during the ritual, Veronica is then subjected to three days of unexplained, ghostly incidents, which eventually leads to her untimely death.

Directed by one of the most famous names in Spanish horror cinema, Paco Plaza, the film is unnerving viewers because they cannot work out what part of the story is real and what is fiction. 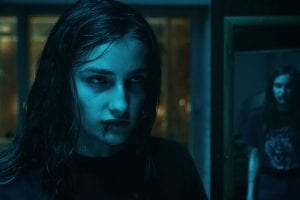 The movie is loosely based on the 1990 ‘Vallecas case’, in which a young girl, named Estefania Gutierrez Lazaro, mysteriously died after playing with a Ouija board.

Estefania held a seance at her school in Vallecas, a town south of Madrid, in a bid to make contact with a friend’s boyfriend who had died in a motorbike accident.

Reports say a teacher interrupted the ceremony and friends claim they saw smoke go into the girl’s nose and mouth.

A few days later, Estefania started to suffer with hallucinations and terrifying seizures but doctors could not identify or diagnose any health problems.

The symptoms intensified, with the teenager bursting into rages describing evil shadows walking past her room.

Estefania was found dead in her bedroom a few months after the ritual.

Following their daughter’s death, her parents claimed unexplained incidents began to occur at home, such as doors slamming open and closed, strange voices whispering and a photo of Estefania self combusting into flames.

It has been dubbed the scariest film of 2018 and has been awarded a 100% rating on Rotten Tomatoes.