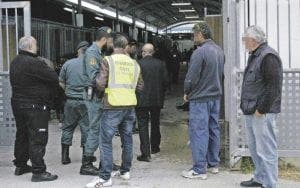 A MAN in Spain has been caged after being caught on tape having sex with horses.

The twisted suspect was caught in the act after the stable owners in Mallorca noticed injuries and marks on a mare and a foal.

They set up security cameras after the vets noticed marks on the animals’ genitals that were consistent with being mistreated sexually.

Police arrested the man after being made aware of the footage.

He has been released on bail and will be summoned to testify at Inca’s No.2 investigative court.

The owners finally decided to place security cameras in the barn after realising their horses had been abused several times.

The injuries suffered by the two animals were not only due to the sexual acts that the man had with them, but also due to the ‘introduction of objects’.

Police identified the man – a 50-year-old Alcudia local – after a month-long investigation.

He has a family and stable employment, and no history of animal abuse.