EXPATS and locals have pleaded with drivers to slow down on a notorious road on the Costa del Sol.

It comes after a photo of an overturned car went viral among expat groups on social media this week.

The image shows a white Jeep on its back on the A7 by Bahia de Las Rocas, in Manilva.

“Many accidents on both sides of this stretch of road,” wrote one expat, “Lived near here over two years and lost count! Moral of the story is please, just slow down!” 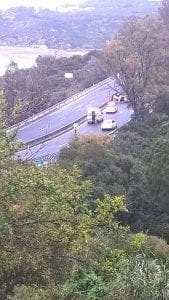 Another said: “I don’t want to kill or be killed but there are some lunatics out there –  speed limit signs have been worked out for a reason…all nationalities included here.”

One said the wet roads are to blame, making the sharp turn more lethal.

“Its because people drive too fast, the water lies on both sides of the road especially when its stopped raining,” they explained.

“As soon as they brake they have no chance as they aquaplane and lose all control of the vehicle, usually resulting in hitting the concrete bollard in the central reservation and coming back across to hit the metal bollards.

..another car ended up upside down on the A7 by the bottom of Bahia de Las Rocas. It keeps happening at the same place ????

“Slow down, use your gears and try not to take out anybody else with your foolishness.

“Always break before a bend, never on it. We have seen so many accidents on these bends over the years but people never learn. Its the old adage, it wont happen to me.”