A SHOCKING five cyclists have died on the roads in the Balearics this year.

In addition, the emergency services have responded to over 250 accidents involving cyclists.

Police are now urging cyclists to act with ‘extreme caution’ on the roads.

They have been told to wear protective gear, including a helmet, have lights and reflective clothing, and always use bike lanes or the hard shoulder.

Drivers are also being reminded to leave 1.5 metres between cyclists and their vehicles while slowly over taking them. 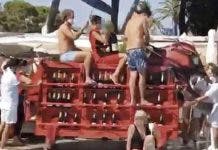