Just to recap, in case you missed me on TV this year, I opened Joffrey’s French restaurant with my chef partner Joffrey Charles in La Cala de Mijas last year.

Before I took the plunge into the minefield that is hospitality I was a television stylist for TV3 in Ireland for over a decade.

And when I transitioned from fashion to restaurant owner I was a complete fish out of water, and all of it made considerably worse by being caught – excruciatingly for me – on camera for the last series of Channel 4’s A New Life in the Sun. 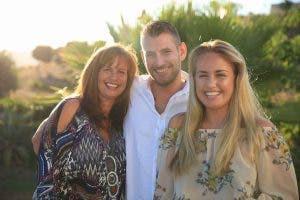 But that is, hopefully, nearly behind me now but I intend to write monthly on the trials and tribulations of owning a restaurant in southern Spain.

Oh and give you the odd recipe and a few juicy tidbits on our guests, a few of them famous.

The main thing to note is since the TV show aired in February we have been incredibly busy.

We have seen a sharp increase in business, allowing us to fly in our new Malaga-born sous chef from London, Marcus Nieto, formerly of Michelin Star restaurant Barrafina.

Joffrey and Marcus are working on our new a la carte menu for May and there is heated debate over what favourites to keep or discard, such as duck parfait and our very popular creme brulee. They are tough decisions to make, when you know that certain dishes have become repeat customer favourites.

But creativity and progress wins out.

I always think customer feedback on new dishes is essential so last week the two chefs had, what we called, a ‘Scallop Off’.

It was a tie according to our esteemed judges though Joffrey’s expression resembled a famous Da Vinci portrait hanging in the Louvre.

Some interesting customers have visited Joffrey’s recently. Much of it thanks to our two-Course €20 lunch (a la Gordon Ramsay in the early days at Claridges).

These include actor Mark from Lock, Stock and Two Smoking Barrels, who is reforming Denise Van Outen’s new pad close by, as well as the British ambassador Simon Manley (thanks Jon), who turned up with his consul Charmaine Arbouin, and a few local politicians. 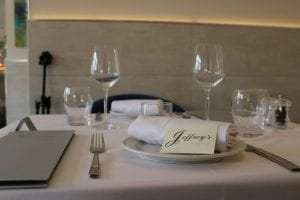 My attempts at Fawlty Towers-style Spanish to an audience of chortling Spanish politicians was well received.

Contrary to popular belief us restaurateurs do actually get on and so you can usually find our neighbours and friends Alison and Steve Hyatt from the Blue Marlin joining us regularly on a Sunday – our day off in the evenings (and Monday too).

Recently we were also joined by Michele Harper-Saunders of Little Geranium and a couple of other local foodies.

Moving forward we have been planning a Royal Wedding luncheon for Harry and Meghan’s big day on May 19. This has been a source of constant debate (truthfully, argument) between Joffrey and I. Not surprising given he is French.

His vision for our restaurant is classy contemporary French fine dining which works… but now and then I like to throw a bloody good party!

His reasoning was he didn’t want to do this luncheon and street party complete with bunting, a sea of union jacks and a very British menu including Coronation Chicken as we are French Fusion.

Anyway, after a 100 years war I won him over so I am now on to Amazon to get my lifesize cardboard cutouts of the happy couple. Just don’t tell the chef! 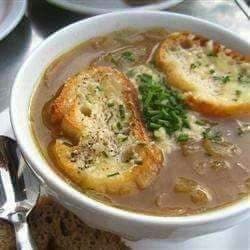 Here is a good tip from Joffrey for all those great home cooks out there. Buy yourself a thermomix, you and your purees will never look back.