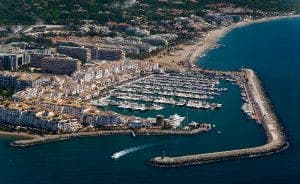 A BRITISH female athlete has died after competing in the IronMan tournament in Marbella.

The competitor was rescued from the sea and rushed to the Costa del Sol Hospital after suffering a heart attack on Sunday.

She was reportedly taking part in the swimming race, which makes up one of the three gruelling long-distance events in the competition in Puerto Banus, at the time of the incident.

She died in the Costa del Sol Hospital on Monday.

It is believed the triathlete, who has not been identified, was brain dead from the moment she collapsed until she died today.

The IronMan competition started off with a 1,900m swim in the sea, followed by a 90km cycle through various towns in the province of Malaga and finished with a 21km half marathon.

It attracted some 2,500 athletes from all over the world and opened the European circuit, allowing athletes to compete for 50 places in the World Championship in South Africa in September.

The winner was Briton, David MacNamee and the first woman to cross the finish line was Laura Philipp from Germany.