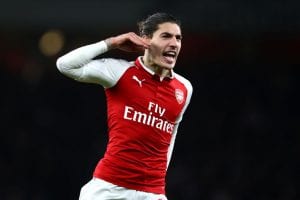 Bellerin, 23, became a vegan at the start of the season but claims he has more energy on and off the pitch since the switch.

But Brazil said he needs to get a steak inside him.

“He was a good player but he’s gone. I don’t know what’s happened to him.

“Look at [Diego] Costa – do you think he has a Caesar salad every Sunday lunch?

Bellerin claims he no longer has to strap up his ankles to play since going vegan.