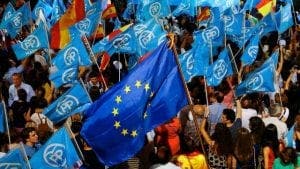 THE People’s Party (PP) would hold onto a slim lead if a general election was called this week, according to an official voting intention poll.

The data, collected by the Sociological Research Center (CIS), predicted that the PP would secure 24%.

Centre-right part Ciudadanos would move into second position, narrowly overtaking the Socialists with 22.4% to 22% respectively.

The PP currently holds a minority in parliament following the 2016 general election with Spaniards expected to return to voting booths in 2020.