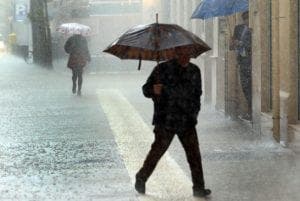 HEAT will build across northern Europe this weekend while southern Spain will have less than average temperatures and rain.

According to the Weather Channel, high pressure will continue to dominate in central and northern regions with temperatures rising above 30C in Germany, which is 10C above average, by next Tuesday.

“Values should remain above normal well into June as the mass of hot weather stretches from central Europe to Scandinavia,” it added.

“There will be very little rain to alleviate the risk of any forest fires in the blistering heat.”

Meanwhile, low pressure will send temperatures dropping in southern Spain with the threat of some heavy rain. 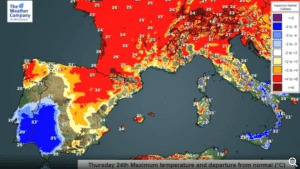 “Sevilla is forecast to see highs around 23-24C over the coming week with just 22C forecast for Thursday.

“Precipitation is forecast to remain well above normal across much of Iberia over the next two weeks with 200% of normal rainfall expected over the interior and 300% in the mountains.”

According to weather agency AEMET, there is a 65-90% chance of rain in Sevilla this Thursday, Friday and Sunday.

In Malaga there is 65% chance of rain on Thursday and Sunday.

Marbella has a 75% chance of rain on Thursday and a 50% chance on Sunday.