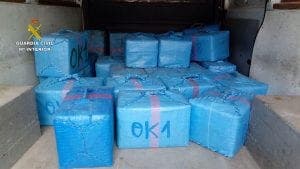 SPANISH authorities have broken up one of the ‘biggest’ hashish drug smuggling rings in the Campo de Gibraltar.

It is estimated the drug ring brought more than 10,000 kilograms of hashish from Morocco to Spain.

12 people have been arrested, while €190,000 in cash was seized along with a gun, ammunition, a bulletproof vest and ‘high-end vehicles’.

It comes after the Guardia Civil was involved in a dangerous high-speed car chase with the drug smugglers in San Roque in Cadiz last month.

After realising there was nowhere to turn the criminals attacked the officers, leaving two of them hospitalised.

The driver was arrested and 843 kilograms of hashish was found in the van.

Following the attack, officials discovered the gang had chartered a RHIB to pick up hashish from Morocco.

The Guardia Civil then raided a house linked to the traffickers in La Linea de la Concepcion, which was storing 4,200 kilograms of hashish. A person was arrested and a gun was seized. 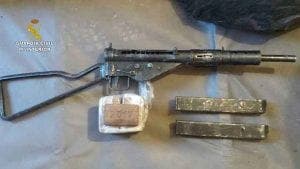 Earlier this month searches were carried out across various towns in La Linea, where 10 people were arrested, along with wetsuits, radio transmitters and two plastic bags containing wads of €20 and €10 notes worth almost €190,000.

Officials believe the organisation was ‘one of the most active’ gangs dedicated to drug-trafficking in the Campo de Gibraltar.