A MANHUNT is underway after a Brit was shot in the buttocks in Spain last night.

The holidaymaker is recovering in hospital after reportedly being caught in the crossfire between a ‘gangland shootout’.

Two other men, both of Arab origin, were also shot at the nightclub in Benidorm.

The 42-year-old Brit suffered superficial wounds to his bottom that may have been from a ricochet bullet.

The shocking shootout took place at around 11pm outside the Hippodrome Disco Club in Little England.

Police are looking for four men.

A source told the Sun: “He (the Brit) was here temporarily and had planned to fly back home on Saturday and we think at this stage he is simply a tourist who was in the wrong place at the wrong time.

“Witnesses have not said there was a row or fight prior to the shooting.

“One of the theories we are looking at is this was a settling of scores linked to drug dealing.”

The getaway car is believed to be foreign-plated. 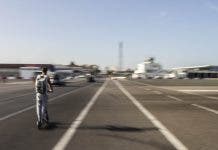