THIS is the moment a car speeds off after brutally hitting a cyclist in Mallorca.

The Guardia Civil have arrested the 36-year-old driver after knocking down the cyclist at a roundabout in front of Mercapalma in Palma on June 23.

CCTV footage shows the cyclist flying into the air and hitting the car bonnet.

The driver reverses slightly before speeding away as the victim lay in the middle of the road, without stopping to check if he needed help.

Luckily a lorry driver immediately spotted the injured cyclist and got out of the vehicle.

He was then rushed to hospital, however the Guardia Civil have not revealed the extent of his injuries.

After being arrested, the driver confessed and has been charged with failure to render aid.

Officials said the driver did not stop to give way at the roundabout and slammed into the cyclist, who had been following the rules of the road correctly. 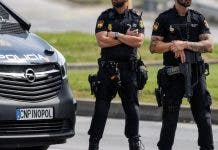