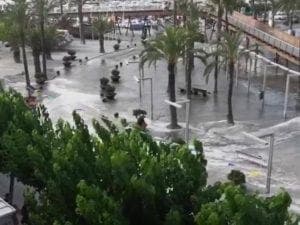 A TOURIST has died after being swept away in the mini-tsunami in Mallorca.

The 53-year-old man from Germany died yesterday afternoon in the Santanyi area after being hit by a huge wave.

He was on holiday with his wife and eight-year-old twin children who were together when the tragic accident occurred.

They were walking down a flight of stairs leading to the sea at around 3.30pm when the giant wave hit.

The children, a boy and a girl, had also fallen into the water at the same time but the mother managed to rescue the little girl seconds later.

However, the son and the father were being dragged away by a strong tide and the mother screamed for help.

Local residents rushed down with a canoe and rescued the boy and shortly after the father, who was unconscious.

They immediately attempted to resuscitate him but were unsuccessful.

Paramedics pronounced him dead at the scene.

The wife, who was in a state of shock, is receiving psychological treatment.

An autopsy will be carried out to determine whether his death was caused by drowning or hitting against a rock.