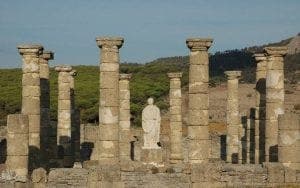 THE pungent scent of tuna is wafting down the street from the salting factory, while toga-clad townsfolk make their way to the forum to shop and socialise.

It’s mid morning, and maybe later – in the heat of the day – they will duck for cover and chill out at the town’s spa, punish a few slaves and then treat the wife to a show at the theatre.

Picture the scene at Baelo Claudia 1,800 years ago, at that time one of Spain’s most important Roman settlements.

The ruined Roman city on the beachfront at Bolonia, a ten minute drive west of Tarifa, had a booming economy back in 2AD, based on its fish salting industry.

Today, at this reconstructed living museum, you can walk the cobbled streets, explore old Roman villas or declaim a few stanzas by Seneca from the stage of the ancient amphitheatre.

Shut your eyes and you can almost believe you’ve been beamed back a couple of centuries.

Stepping through the town gate and exploring this once magnificent Roman city is more than enough to set the imagination racing.

It is designed to be taken slowly, at a stroll, while breathing in the fresh Atlantic air as the wind wafts you gently through the ruins. Baelo’s main road – decumanus maximus – runs from east to west, connecting two large town gates.

From here a well-signposted route leads you around the Roman settlement, with plenty of information in English to accompany the strikingly well-preserved ruins.

The town had really started growing in 2AD, after a product, known as garum, made in Baelo, took off among the chattering classes of Rome. Made out of fish guts it was a pungent, but allegedly tasty addition to any meal and the whole area became dedicated to its production, with Roman ships arriving and departing on a daily basis for Italy, loaded up with the magic product.