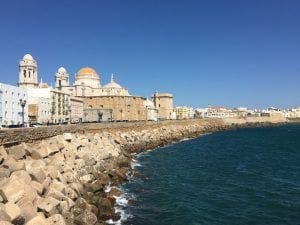 No trip to the Costa de la Luz would be complete without a night or two in the majestic, coastal city of Cadiz.

Considered the oldest continuously inhabited settlement in Europe, founded by the Phoenicians in around 1100 BC, the ancient city is an enchanting place to get lost, whether it be down the winding alleys of the Old Town or admiring the eroding walls of the many historic plazas.

Boasting a number of beautiful beaches, Cadiz is a true sunworshipper’s paradise.

Its La Playa de la Caleta and the promenade were even used as a set for Cuban scenes in the James Bond Die Another Day movie, as the area resembles Havana’s famous Malecon.

For over 200 years, the city has been known as La Tacita de Plata (The Silver Teacup), as it was once the third most wealthy city in Spain, following Madrid and Barcelona.

Meanwhile others say Cadiz’s beauty is enhanced by the glistening sun’s beams bouncing off the water, casting a ‘silver’ reflection on its ancient walls.

Artisan Cadiz’s yellow-domed baroque- neoclassical cathedral is a sight to behold and a walk down the promenade with an artisan ice cream in hand is one of the best ways to admire it.

With the smell of fresh fish in the air, the city is famous for its fresh seafood and there are plenty of places to try it in the Barrio de la Vina.

Another way to experience Cadiz’s history is with a free trip to the remains of a Roman amphitheatre, followed by an intimate flamenco show in the city which helped invent flamenco.