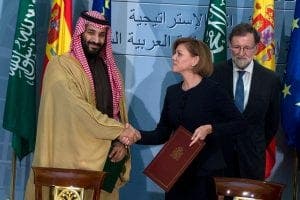 SPAIN will sell 400 missiles to Saudi Arabia despite growing concerns over their use in war-torn Yemen following threats from Saudi officials.

It comes after the Spanish Defence Ministry announced last week it would halt the €9.2 million sale of laser-guided missiles fearing they would be used in the ongoing conflict.

Cadena Ser reported the government had started the process of cancelling a contract signed between Mariano Rajoy’s former government and the Gulf Arab state in 2015.

But just 48 hours after Defence Minister Margarita Robles said the sale was ‘undergoing review’, the government decided to reactivate it.

Foreign Minister Josep Borrell announced the U-turn on Thursday stating that his department found ‘no irregularities to prevent’ the sale and the missiles would be sent to honour the 2015 agreement.

The decision came following threats from Saudi authorities, who told Madrid that other contracts would be at risk if the missiles sale was halted, including the purchase of five Spain-produced warships totalling over €1.8 billion.

Workers at the Navantia shipyard, based in Cadiz, staged protests to fight for the 6,000 people employed by the company.