A WOMAN has died while trying to cross a stream with her husband following heavy rainfall in Malaga.

The unidentified woman, believed to be around 50 years old, was swept away in Velez-Malaga at around 9pm.

Her body was found half an hour later around two kilometers away from where she fell into the water.

According to Civil Protection of Vélez-Málaga, the woman tried to cross the Seco River at the height of the Hacienda Macarena, but was overpowered by the stream before falling in and being dragged by the water.

The woman is believed to have been accompanied by her husband, who crossed first without difficulty.

He lost sight of his wife after arriving to the other side and called emergency services immediately.

Policia Nacional, Policia Local and firemen rushed to the scene to initiate a search, which tragically ended with the discover of her body just 30 minutes later. 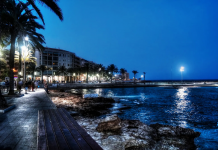