THE Olive Press is launching an appeal to help desperate parents save their four-year-old twins from going blind.

Little Erik and Alexia urgently need more tests to determine if their deteriorating vision can be treated.

The expensive genetic tests and specialist glasses are crippling the Torremolinos-based family, who have had to opt for private healthcare after doctors warned it could take over two years to diagnose and treat the children on the public healthcare system.

But their eyesight is deteriorating so rapidly, they could go blind in that time.

Half-Liverpudlian mum Fabiola Heston, 39, told the Olive Press how she and partner, Juan, 36, a mechanic, feel ‘hopeless’ after selling their car to pay for the escalating medical costs.

It comes after the twins were diagnosed in April with a rare form of retinal dystrophy, a genetic disease which gradually causes blindness.

Doctors warned the family that due to the rarity of the disease the children would have to wait up to a year to see a specialist on the Spanish national healthcare system. It would then take another year to receive results, as the tests would be sent for analysis in Madrid.

But after three rounds of private medical tests costing almost €3,000 each, doctors are still unable to identify the gene, meaning they cannot diagnose the severity, nor advise on treatment.

And now the twins have to undergo a fourth genetic test costing a staggering €2,700 per child.

“It’s changing our lives completely we just don’t have money like that,” Fabiola told the Olive Press. “It’s impossible to save up. We’re really struggling.”

Now something urgently needs to be done, as Erik’s vision has rapidly deteriorated in just two months.

His disease is classed as ‘severe’ and worse than his sister’s, meaning identifying the gene as soon as possible is crucial.

“Any help we can get will be amazing. Thank you so much,” added the mum.

“It’s the only treatment in the world that can slow down the disease. Even though it’s so expensive, I so hope the gene matches for Luxturna so there’s at least an option to treat them,” added Fabiola.

The couple first noticed an issue with Erik’s eyesight at ten months old and had to get him glasses, at a cost of up to €800 a pair. Alexia needed them by age three.

The pair also need to give the twins expensive supplements each day, as well as eye drops.

Their eyesight is so sensitive they have to wear special sunglasses during the day, as sunlight can further destroy it. But even artificial light in the house can be too much.

“Sometimes in shopping centres or around the house they ask me to turn off the lights because it’s hurting their eyes. It’s just terrible,” said the mum.

Despite Fabiola’s best efforts to shield the children from the reality of their illness, it ‘breaks her heart’ to hear others constantly question why they wear sunglasses inside.

“I don’t know why people make stupid comments. I try to act like there’s nothing wrong and tell them they look lovely in their cool glasses. They’re only young but they know something isn’t right,” added the mum. 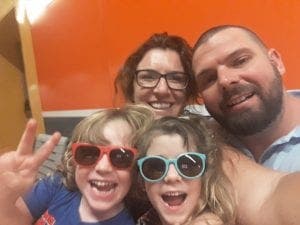 The family need €5,400 for two urgent eye tests and more for an appointment at Moorfields Eye Hospital in London – the best of its kind in Europe – in a bid to find more options.

The Olive Press has now launched a GoFundMe page for the family to help raise the funds.

Anything our readers can spare will help greatly.

Alternatively, if any readers have contacts within the medical industry who can offer advice, please get in touch at newsdesk@theolivepress.es.