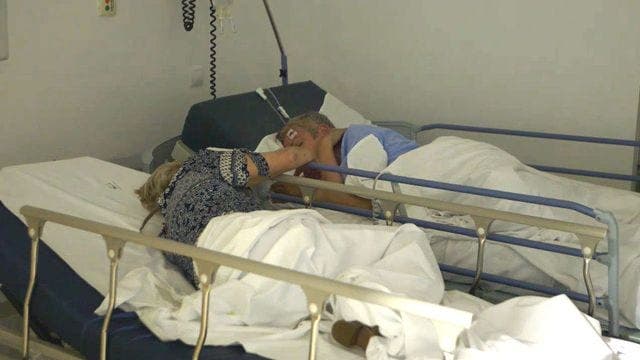 THIS is the viral moment two drunk Brits had to be treated at a hospital in expat hotspot Torrevieja.

The clip, from the programme Heroes, shown on Cuatro, shows two disorientated Brits being treated after one is believed to have fallen and hit her head.

Clearly intoxicated, neither of the women can recall what happened before they can be seen falling asleep on their hospital beds.

According to the doctors in the clip, dealing with drunk Brits is ‘not out of the ordinary’ in Torrevieja, a popular area among expats and visiting tourists.

When asked why she was bleeding, the Brit, from Scotland, says ‘I don’t know’ before telling her nurse how ‘beautiful’ he is.

The other Brit then starts dancing with nurse Rico to ‘celebrate divorcing her husband.’

“We are sure they will wake up with a good hangover,” Cuatro wrote in its press release.

But while the TV network chose to see the funny side, some Spaniards have been left fuming at the clip.

“This is shameful!” wrote one on disgruntled local below Cuatro’s video on Facebook, “They come to the country to abuse our health system and get up to their eyebrows in alcohol!”

“Why is this clip supposed to be ‘great’?” wrote another, “Why are the British treated as first class citizens? If they were Latina or Spanish they would probably be kicked out of the hospital.”

“Now that they voted for Brexit, I hope they are made to pay,” chimed in another.

Others supported the women.

“I don’t think it’s nice that they laughed at them, even if they’re drunk and are especially as they are older,” wrote one.

Another added: “A lot of laughs were had here, these are good people and just came to enjoy themselves, let them off.”