PORTO’S Spanish goalkeeper Iker Casillas has been rushed to hospital after suffering a heart attack during a training session.

The Real Madrid legend was taken to Hospital CUF Porto to be treated and is said to be in a stable condition.

The Madrid born international debuted for Real Madrid as a teenager 20 years ago and went on to play 700 games for Los Blancos, winning five La Liga titles.

His club said: “Casillas is well, stable and his heart problem is solved.” 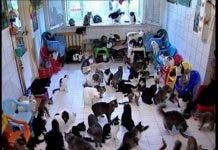