I WAS pleasantly surprised to have received a call from a potential client having found me online through my Olive Press articles, looking to move to Mallorca from South Africa.

He had heard about the ‘Beckham Law’ and was enquiring if it was still valid and whether he could use this law to becoming resident here.

Although not called the Beckham Law officially here in Mallorca, the legislation is still applicable, allowing people to move here with favorable tax conditions.

Originally known as ‘The Special Displaced Workers Regime’ it was designed to attract brains, talent and wealth from all over the world, encouraging high earners to become Tax Resident in Spain (spending more than 183 days a year living there) only requiring them to pay 24% income tax (IRPF), as opposed to rising up to 43%, or higher in certain circumstances.

It was of course given its name by David Beckham, one of the first high profile sports people to use it when he signed for Real Madrid.

The main criteria, which still apply for the Beckham Rule are:

You must not have been a Spanish resident in the previous 10 years.

The rule can be used for the remaining tax year you start in, and the following five.

The application is to be made within six months of starting employment in Spain.

You have to be resident in Spain and also have at least 85% of your work interests there.

One of the major benefits of this rule is you do not pay taxes on any gains outside of Spain, making a considerable saving on any external income.

If able to qualify, clearly this would be very attractive to high earners!

We have yet to ascertain this particular person’s eligibility, but I have left that with the lawyers.

According to a report released recently by the General Council of Notaries, the sale of properties to foreigners in Spain as a whole increased by 1.7% in the second half of 2018.

There was a decline in the non-resident sector from 49% to 44% of sales, with the Balearics showing the second steepest decline in sales, down 13.5%.

Property prices in the Balearics were much higher than elsewhere in Spain, with the average square metre price at €2,987, with Madrid second at €2,254.

To date 2019 has shown the market in general to be slower than normal, due to delayed Brexit negotiations for the Brits, and the Swedes subdued due to the rate of exchange.

But, according to many German-focused agencies, the German market is still strong, which will be a relief to both agents and sellers alike.

That’s it from me for the moment, see you in June!

For any questions or comments, or if you require assistance with selling or buying a property please contact Amanda on ajb@mjcassociates.net 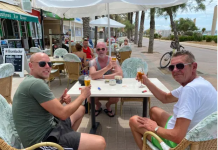