THE Olive Press has had a sneak preview of a new boutique hotel brewing its own craft beer on the Costa del Sol.

The grand opening of the four-star Maravilla Palace in Estepona, and its on-site microbrewery is set for January.

German brand Ellerbrau will be brewing up the Germanic way, using methods dating back to 1516 in the hotel basement.

The factory, which cost €1 million, will employ 25 staff, pump out 300,000 litres of beer a year, and even has a deal with the German University of Deomens to support its master brewers.

Guests staying in one of the 49 single, double, or combination rooms, get a taste of the artisan beverages at one of two bars in the Maravilla.

Beer is also a great match for the local and international cuisine on offer in the Maravilla’s fine-dining restaurant.

Also on display at the Maravilla, are skins from a uniquely preserved Medieval tannery, dating back to the 12th century.

The hotel is located on Calle Real and backs onto the stunning Plaza de las Flores, with panoramic views across the whole of Estepona.

Completed with an extended budget of over €15 million, it is the brainchild of German Richard Eller and is run as part of the Silken chain.

Eller described his new hotel as a ‘centre of culture for the people of Estepona’, during a behind-the-scenes tour, overseen by Estepona Mayor Jose Maria Garcia Urbano.

Those in charge said a price list for hotel rooms was not yet available. 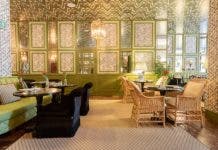 BREAKING: British travellers in Spain and abroad told to return to UK IMMEDIATELY over coronavirus fears