THE best Queen tribute band in the world has been added to the Gibraltar Calling lineup.

Killer Queen will belt out all the hits on the Classic Stage at the festival on the Rock in just 23 days time.

After forming in 1993 the group has become the only tribute act to sell out the same arenas Queen did.

Frontman Patrick Myers’ portrayal of Freddy Mercury has been described as ‘simply uncanny’, while the band has been labelled ‘the best thing since Queen’.

“It’s been an amazing journey,” the singer said, “That first show back in June 1993 changed my life.

“We thought our band would last maybe a summer at the most but it’s a very addictive thing performing these songs.”

Joining Killer Queen at the festival at Europa Point from September 7-8 is a wealth of international talent.

Tickets start at £85 and are available from www.gibraltarcalling.com 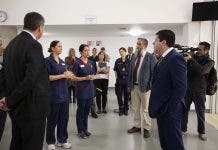 8,000 lives have been saved in the Comunitat Valenciana thanks to up to 96% of residents staying at home,...

Gaudí in the Cinema