THIS is the moment a toddler cheated death by walking along the ledge of a Spanish block of flats while her ‘mother was in the shower’.

The video, taken by a horrified onlooker, shows the unidentified tot tiptoeing along a narrow section of the building’s exterior.

She can be seen emerging from the window, before venturing along the corner of the block, where there is no barrier.

Using her hand for support, she reaches a balcony before she doubles back and climbs through the window.

The young daredevil is thought to be from a young Finnish family, who are holidaying in Tenerife at the apartment in Playa Paraiso, Adeje.

Police reportedly didn’t find out about the incident until they saw the video on Spanish TV channel La Sexta on Monday.

The unbelievable footage was posted on the ‘I Love Tenerife’ Facebook group.

An accompanying caption read: “OMG! This toddler managed to climb out of this building window whilst the parents were taking a shower.

“This apparently happened over the weekend at a property in Playa Paraiso, Tenerife!” 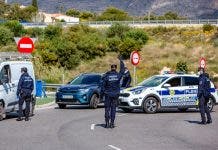