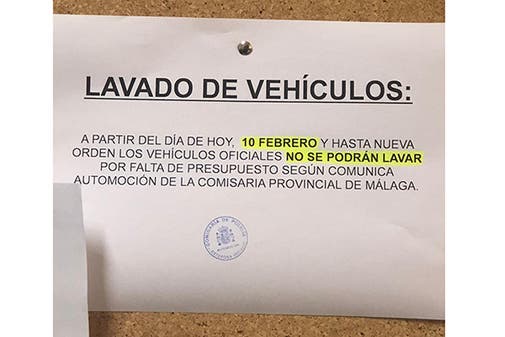 POLICE on Spain’s Costa del Sol don’t have enough money to wash their own cars.

That’s according to the notice board at Estepona’s Policia Nacional station which said it did not have the budget to pay for the essential service.

“As of today, February 10, and until further notice, official vehicles cannot be washed due to a lack of budget,” the notice reads.

Miguel Millan, chief of Policia Nacional in Malaga, told El Mundo that Estepona could be the first of many to stop washing their cars.

It comes after the Automotive department received a significant budget cut.

“There is no money at all,” he told the respected Spanish paper, “the cars are in an unfortunate hygienic state.

“Of course officers clear away their food etc but there is also lots of dust, dirt, glass…many of the vehicles have never seen a vacuum cleaner.”

He added that the most worrying aspect is that they are not being disinfected, labelling the situation as ‘outrageous’.

Millan said he would be submitting a request to have the budget restored.

Fiona Govan - 19 May, 2022 @ 17:44
SPAIN'S Met Office has issued alerts for high temperatures across much of Spain and warned of extreme risk of wildfires as the nation sizzles. Aemet...