PHASE four allows people to finally go for a dip without getting in trouble as long as beaches do not become too crowded.

Lifeguards are now in place to protect beach-goers while swimming pools at Camp Bay and Little Bay have reopened.

Chief Minister Fabian Picardo said toilets at Catalan Bay have been refurbished for use, with those in Camp Bay to be ready in ‘the next few weeks’.

Outdoor showers will not be available after public health advice has warned against their usage during the pandemic.

“Because our beaches are now in full swing, golden hour will no longer be available at Eastern Beach and Camp Bay,” said Picardo.

“It will continue to be available at Commonwealth Park, and the Victoria Stadium.”

“We’ve noticed that the number of people taking up golden hour has considerably reduced.”

“We’ll continue to monitor how many people are using this option during this week and we’ll consider introducing a third location should this become necessary.”

Phase four will also see bars and pubs opening to a limited capacity from June 22, although only until midnight.

It comes after images on social media showed large numbers of people in places like Chatham Counterguard, at times not keeping to adequate social distancing rules.

In regards to this, Picardo said: “Establishments have acted in keeping with the public health advice and the environmental agency permits.”

“Unfortunately, many patrons did not cooperate after dinnertime and started to congregate in what would usually have been regarded as normal groups.”

“Therefore, we’re going to modify the permits, and if necessary, the law in this respect to provide extra protection in this crucial phase.”

Phase five is set to begin on June 29, with Elderly Residential Services potentially opening their doors to visitors and the number of people allowed at public gatherings increased.

Restaurants may also be allowed to have more customers in phase five, although this will be looked at going forward.

More than 10,000 people have been swab tested to see if they have been infected with COVID-19 since the pandemic broke out in Gibraltar.

This amounts to nearly a third of the Rock’s entire resident population of over 34,000 people.

There have only been 176 cases on the rock so far, with 174 cases recovered.

Interestingly enough, the Chief Minister said that 26 out of the 174 cases have reported on having the virus twice, raising questions about immunity.

For this, antibody tests of GHA staff these last couple of weeks have been done to see if any of them have had COVID-19 in the past.

A total of 1247 antibody tests were carried out, and only 18 were found to have had the coronavirus, a percentage of 1.4%.

“What this means is that we have a low level of measurable antibodies in this specific group, although GHA staff is not representative of the whole population,” added Picardo.

“It does demonstrate the understanding all along that the picture of immunity is complex and comprises of antibodies, cellular immunity and many other factors.”

The Chief Minister said that the Government needs public health advice to see whether it is worth testing the whole of the population as there is ‘such a low prevalence of the virus and the antibodies’.

The BEAT COVID Gibraltar contact tracing app is set to be released this week after some final tests.

“Unlike the UK, our app will not hold or store any of your personal data of anyone else you come into contact with,” assured Picardo.

“There is no central database, and neither the government nor the GHA will have this or any other information about you.”

“The government and I in particular have zero interest in where you have been, who you have been with or what you are doing.”

He warned that if a second wave of COVID-19 hits Gibraltar, people would need to download the app to keep loved ones safe. 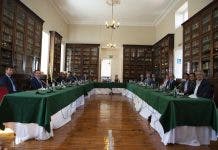 Gibraltar works out police, customs and environment with Spain after Brexit