THE Guardia Civil has been investigating a man in Andalucia for creating a fake identity in order to threaten the Mayor of his town.

A 22-year-old is being investigated for creating a false identity and threatening the Mayor of Arjonilla in Jaen province.

Arjonilla town hall had posted on social media about the public celebrations of the town’s patron saint in August 2019.

The town hall informed the Guardia Civil that someone had been posting threatening comments on these social media posts towards the Mayor, Miguel Angel Carmona.

Although the comments included ‘opinions of all kinds’, some were threatening and created ‘uneasiness in the daily life of the Mayor and his colleagues’, said the town hall.

In the complaint, it was found that the town hall ‘feared that the disclosure of the aforementioned threats could provoke worrying reactions and incite a possible upheaval of public order, which could lead to criminal actions.’

The Guardia Civil managed to track down the culprit via the use of his mobile, with the 22-year-old now being under investigation.

This comes as the notorious high-end criminal, ‘El Sapo’, famous for creating fake identities, was arrested on the Costa del Sol earlier this week. 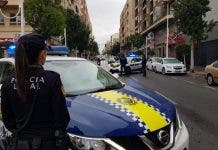