MANUEL Romo, from Extremadura, has been named the most handsome man in Spain.

The 24-year-old has won the title of Mister International Spain 2020, after entering the beauty competition held in Castellon, on July 24.

Contrary to the ruling of the competition, a poll held by El Huffington online revealed that 96% of 3009 voters, disagreed with Romo being the best looking man in Spain.

The 6 foot 3 beauty pageant winner wore a national costume, a gold swimming speedo, and an evening outfit for the categories in the competition.

Romo has a degree in Administration, Business management, and law, and is currently living in Portugal.

In an interview with ¡Hola! he said his new title gives him a chance to be an ’ambassador for the 21st-century man, who cares for himself on the outside but also on the inside.’ 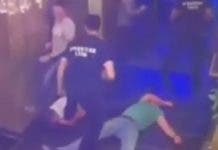 Alex Trelinski - 21 Oct, 2020 @ 13:30
A STRUGGLING shopping centre in Alicante's port area is become a major business complex employing up to a thousand people.