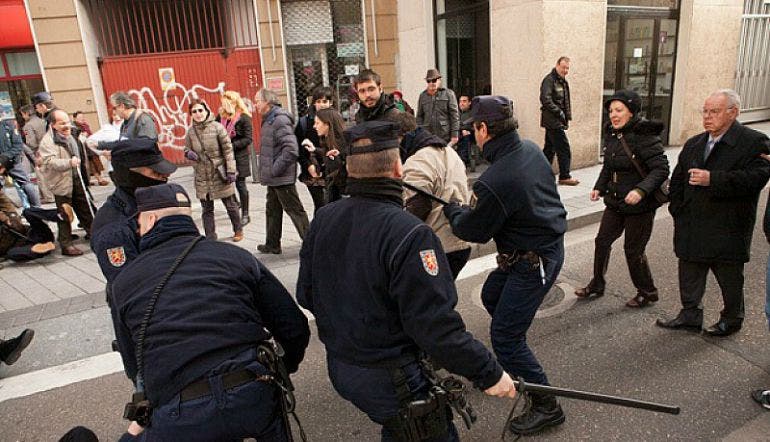 SPAIN has been found guilty of flouting the right to protest during a violent police intervention at an anti-austerity demonstration in Valladolid in February 2014.

The European Court of Human Rights(ECHR) in Strasbourg ruled in favour of protestor, Montserrat Laguna Guzman, who suffered permanent injuries after she was coshed by a police baton.

They ordered that she be paid €248.10 for fees and expenses for ‘not protecting her right to assembly’ which breaches the rules of the European Convention on Human Rights.

In 2018, Spain’s National Court awarded her €10,000 in compensation for her injuries in a case against the Interior Ministry after a judge ruled that she was ‘unjustly attacked’.

However, criminal proceedings against the Policia Nacional agent who assaulted Laguna Guzman were dismissed.

Around 50 people took part in an unscheduled protest outside a Valladolid restaurant where members of the Partido Popular, who ran Spain’s government at the time, were having lunch during a break in their national conference.

Police on horseback arrived on the scene and broke up the demonstration with Laguna Guzmán being hospitalised.

The ECHR ruling said that the ‘use of force cannot become an end in itself’ and that Spanish authorities should ‘show a certain degree of tolerance towards spontaneous demonstrations that take place peacefully’.

The ‘unjustified use of force against the plaintiff’, who was not arrested or prosecuted is ‘therefore sufficient for the Court to conclude that the interference with her rights had been disproportionate’.