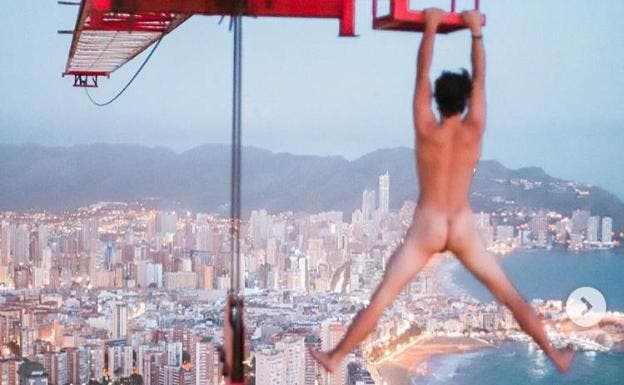 A BRITISH teenager has returned to Benidorm to foolishly climb naked up a 180 metre-high crane next to the Intempo building.

Adam Lockwood, who brands himself on social media as ‘The Little Nuisance’ illegally climbed six of the resort’s tallest buildings in February.

Those included the Intempo, the Torre Lugano, and the Gran Bali, which is the tallest hotel in Europe.

The 19-year-old from Wigan was arrested by Benidorm’s Policia Local and fined earlier this year, but that did not put him off baring all for his latest dangerous stunt.

He posted several photographs of him dangling naked off the Intempo crane yesterday(November 11)..

One pose showed him clinging on with just arm.

Lockwood said on his social media account that his new stunt enabled him to ‘tick that one off the list of totally unnecessary things to do before I turn 20’.

The teenager was sentenced to three months in jail in August, suspended for two years, by a judge in Manchester.

Manchester City Council said he breached a three-year injunction imposed in 2019 that banned him from trespassing and posting content online.

The judge branded his stunts ironically as ‘the height of stupidity’ and that Lockwood was motivated by ‘arrogance’ and a craving for ‘celebrity’.

His recent UK transgressions included him standing on the roof of Manchester’s Arndale Food Court during a Black Lives Matter protest in June.

A few days later, he dangled from the edge of a 180 metre balcony at a building in London’s Canary Wharf.