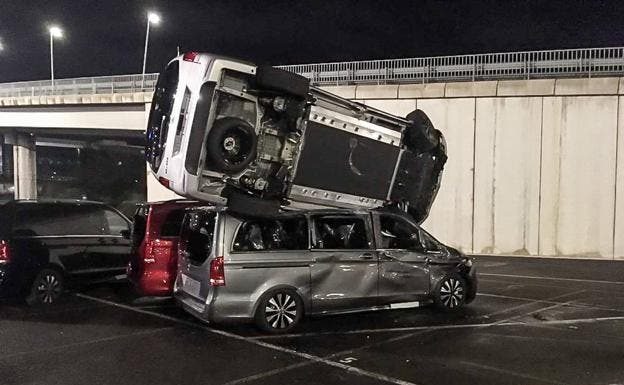 AN ex-Mercedes car factory worker got delayed revenge over losing his job by destroying 69 brand-new vans with a stolen bulldozer this morning(December 31).

The 38-year-old man worked at company’s plant in Vitoria in the Basque Country until he was sacked in 2017.

He caused over €5 million of devastation and was arrested and charged unsurprisingly with a crime of causing damage.

The man stole the bulldozer from a construction company at an industrial estate in Gojain.

Some unconfirmed reports suggested that he had recently been fired from that firm.

Once behind the wheel, he smashed through an entrance barrier and gate, as well as damaging other vehicles during his departure.

He then embarked on a 21 kilometre journey and collided with road signs en route to a parking lot on a Jundiz industrial estate.

The site is used to store new Mercedes-Benz electric mini-vans that had come off the production line in Vitoria.

A security guard was left speechless as the bulldozer careered through a fence and headed towards the new vans.

The vehicles were either totally destroyed or picked up and flung on top of each other.

The guard brought the destruction to an end by firing a warning shot from his gun into the air.

Police then arrived to arrest the bulldozer driver and to assess the damage.

Morocco bans flights to and from UK ‘until further notice’ due to rising COVID rates but government ‘sticking to...