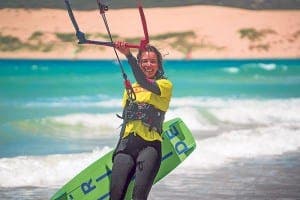 IT’S gusting 45 knots and my lines have just got tangled with the only other kitesurfer within half a kilometer.

We’re two metres deep in the briny and with the waves crashing over our heads it is impossible to hear the urgent instructions our teacher is barking from the beach.

Could it get any worse?

Well for starters I am caught up with the only other student on my course – Stefan, a German, based in Zurich – and he is just as clueless as me. And second, just as I finally unhook the last of my four lines from his kite, I am jolted stiff from an electric shock from below.

Quite unsure what the hell is going on, in my panic I pull the red emergency cord, as I have been instructed to do.

It’s like Apollo One as within seconds the 3.5m comet is almost out of sight as it tumbles and somersaults its way south at a rate of knots – 45 to be exact.

When we finally clamber out of the sea, our Slovakian instructor is completely beside herself. She has been screaming blue murder from the beach and is only marginally consoled that nobody has drowned.

Luckily it is only a €250 beginner’s kite and, luckier still, one of only a dozen brave souls daring enough to risk this particularly crazy Tarifa morning (one of the windiest for months, I am told) zooms off after it.

A 10-minute walk down the beach later and he has fished it out, rolled it up and delivered it to us on the shore, before calling us a complete bunch of losers and shaking his bloodied little finger – cut by one of my lines – as proof of his endeavour.

Not a happy bunny, our instructor Veronica is at least cheered up when I tell her about the sudden electric shock that had led to my disgrace.

It turns out I had stepped on a leguado (or sole), a flat fish that lurks on the rocks. Now it all makes perfect sense, she tells me.

I feel marginally better about the whole fiasco and somehow pluck up enough courage to get back in the water later that afternoon, when the wind has dropped just a little bit.

I had volunteered to undertake a three-day kitesurfing course with the Mistral team at Valdevaqueros beach, in Tarifa, as part of this special activities pullout.

While some insisted it must be the start of my mid-life crisis, others just felt sorry for me. I, quite frankly, was terrified.

Everyone knows how windy it gets in Tarifa. The wind turbines along the coast are going full tilt on my drive from Algeciras, and even my walk through the centre of the charming town got a little gusty.

But nothing compares to the sensation you feel when you first walk onto the beach with the kite in one hand and your board in the other.

I was practically knocked off my feet as I stood on the sand, half of which had quickly got into every nook and cranny of my wetsuit not to mention eyes, ears and nose.

According to locals, this is the windiest spot in Europe and has the best conditions for kite and wind surfing. So strong is the wind my instructor told me how a friend’s nine-year-old boy had been literally blown across their street earlier this year from one particularly enthusiastic gust.

It seemed somehow inconceivable that at the age of 45 I was opting for this intense sport, instead of quietly practising my golf swing.

But there are some challenges in life worth undertaking and by the second day I had finally found some rhythm.

Going through the discipline of rigging up your kite is all part of the learning process and the team at Mistral insists that the safety side of the sport is carefully explained.

You certainly feel more confident going out with a fully qualified instructor, even if our Eastern European belle had a bark on her worse than an East London fishmonger. 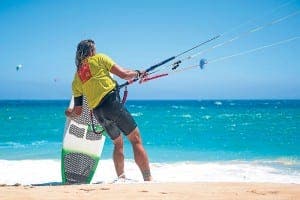 After two days of learning to effectively fly the kite, we were slowly introduced to the water, first getting dragged one way (out to sea) and then dragged back in by the wind. It instilled confidence and by the third day when the board was introduced I was raring to go.

Sadly though, it is not just jumping onboard. With the wind still howling around the 35/40 mark and plenty of waves, it is anything but easy getting the board attached to your feet while lying in the water and trying not to sink, while still flying the kite.

That said, by the afternoon I was finally floating with the board on my feet and actually standing up (albeit for a brief few seconds) when I got the ‘figure of eight’ motion right.

But as experienced kitesurfer and Tarifa stalwart Tony Cassidy tells me, I’m not a million miles off.

“Once you’ve done your three days and you can finally stand up on the board, do another three lessons and get your confidence up,” he advised me.

And as we all know, it’s all about the confidence. So apparently I’ll just need a few more hours of lessons and I’ll be skimming across the waves with the best…

I can hardly call myself a kitesurfer, but one thing’s for certain: when the autumn comes I’ll be back for another go.

Kitesurfs can be rented from a number of well established companies in Tarifa including Kite Passion and ion.

Lessons start from around €200 for a 3-day starter course.