Landscape gardener Nola Lyttle takes a tour of some of the botanical delights of Andalucia, Spain and offers a handy hint when it comes to your own back garden

WITH winter seemingly over, it is time to think about how best to make your garden or patio stand out during the coming months: something to impress your visitors.
Before you so much as buy a seed or plant, I suggest you take a tour of some of the finest gardens on view throughout Andalucía for inspiration. Not all of them charge an entrance fee and those that do are a bargain. It is possible to view the Generalife Gardens in Granada without also paying to see the Alhambra palace itself. Entrance fee to the gardens alone is just five euros – a horticultural bargain.

As with so many of the gardens open to the public throughout Spain, water is the driving force in the Generalife.

The water stairway, known as the Staircase of the Lions, leads to the uppermost part of the Generalife. This unique staircase is divided into three flights with circular landings, separated by small fountains.

The balustrade consists of lime-covered walls and dense vegetation.

The Patio de la Acequia is at the heart of the palace grounds and, on a quiet day, can prove to be one of the most tranquil places to sit and contemplate.

The Patio del Cipres de la Sultana is named after the great Cypress tree that has now dried up and died. This is a garden for romantics and has been much loved by artists throughout the centuries. It is a very intimate patio garden that has a baroque feel to it. The ‘U’ shaped pond contains a Renaissance fountain between two islands lined with hedges of myrtle and surrounded by roses and oleander.

Often the last thing a visitor sees before leaving the gardens for the palace is the Oleander Walk. Oleander can look splendid when in flower anywhere, including in the central reservation of many a Spanish motorway.

Strolling around the Generalife gardens is as close as most of us will get to experience what it must be like to own a carmen (a traditional house with garden) in Granada. Somewhere like my next stop off point, which is just a hop, skip and jump away from the Alhambra palace itself.

The Carmen de los Martires is home to a wide variety of trees, including large palms. The gardens are vast and surround the splendid villa from which there are magnificent views of the city of Granada. They are divided into green spaces that are thought to be typical of various countries.

The French garden has the feeling of Versailles about it. Statues depict the four elements and the four seasons.

Not surprisingly, it is the Jardin Andaluz that is the most impressive area of these often overlooked gardens. Cypress arches are everywhere.

Look out for the charming grotto, slightly hidden from view at the entrance to the villa.

Another splendid garden is set in an altogether more noisy setting. The Finca de la Concepción gardens sit beside the motorway network that takes you to Málaga Airport and beyond.
Yet somehow, once you are in the gardens, you hear little or nothing of the constantly busy autovia.

These gardens are a tropical paradise for those who love their plants and trees big.
In total there are over 800 tropical and subtropical species. There are 100 varieties of palm tree, including an impressive Chilean wine palm (Jubaea chilensis). This is the hardiest feather leafed palm, tolerating a temperature as low as minus 15 Celsius when mature. This and the blue palm from Mexico are particular favourites with palm aficionados.

For me, the black bamboo (Phyllostachys nigra) makes the hairs on the back of my neck stand up. Never on my travels of the gardens of Europe have I seen black bamboo reach such a height as here. In a nice touch, some steps in the gardens have been made out of old bamboo.

I was also impressed by the bark of the kentia (Howea Forsteriana). It is very distinctive with its brown rings on a green bark. Smaller varieties than the one I saw on show are now bought as houseplants in the United Kingdom.

The tallest tree in the entire province of Málaga is found here. Standing at 45 metres high, the araucaria bidwilli hook – or monkey puzzle tree – is splendorous.

Here, it is easy to know what you are admiring at any one time. There are native plants from Mexico, India, Java, China, Japan, Formosa and Australia – from where the moraces originates. Look out for its distinctive trunk and the roots that hang down from the branches and promptly take root in the soil.

From China comes the beautiful orange blossom while South Africa provides the much loved bird of paradise (Strelitzia reginae). Smaller in size but equally impressive is the dwarf date from South East Asia and, standing tall and proud, is the sagu tree from Japan (Cycas revoluta thun).

The Concepción Gardens are not just for show. Much studying takes place here by environmentalists, teachers and plant experts from around the globe.

There is also a workshop in which young people can learn basic gardening and nursery skills as well as how to create watering systems.

In Cordoba you are spoilt for choice when it comes to beautiful gardens, such as those at the Alcazar de los Reyes Cristianos.

The gardens boast one of the largest varieties of plants in Spain. Palm trees are prominent along with the statuesque cypresses. In the oldest section of the gardens orange and lemon trees are plentiful. The box-edged beds are home to clivia, zantedeschia and, my personal favourite, the Agapanthus. Perfumed jasmine grows on the walls alongside blue plumbago.
Nearby, various roses ensure that the harem garden smells wonderful for much of the year.
The gardens alongside the much photographed long pool were laid out as recently as the 1950s. Here formal beds of box plants sit side by side with pansies and petunias.

Adjacent to the most visited tourist attraction in Cordoba, La Mezquita, is the Patio de los Naranjos. This is believed to be the oldest living garden in Europe. Today, where pomegranates and palms once dominated, there is now little decoration other than three stunning fountains and the channels cut through the cobbles for irrigation. While inside La Mezquita the ancient columns dominate, outside 98 mop-head orange trees planted in straight rows are equally impressive. The Patio de los Naranjos is small at only 120 by 60 metres.

The Andalucian patio is one of the most admired aspects of outdoor space in Spain. British homebuyers in the region often ask agents to find them a property with a secluded patio, originally a space used by Romans for meetings.

The Viana Palace in Cordoba boasts truly delightful gardens and thirteen interconnected patios. The house dates from the 17th century and was built on the site of two Roman houses.

The Renaissance gateway welcomes you to a reception patio with a central fountain and cobbled paving. Jasmines and Bougainvillea are rampant here and are an appetiser for what is on offer further inside the maze of patios.

Move on and you come face to face with tangerine trees underplanted with violets. Proceed to the chapel patio and you will witness Seville orange trees, over 100 years old.

At the centre of the maze is a green area of 1,200 square metres containing roses, arums and gorgeous lillies. Two vast date palms, a washingtonia and a Holm oak, are there to provide company for the inevitable fountain.

Be sure you sample Madame’s courtyard. The garden is named after the statue of a woman holding a water jug.

At the end of this journey of the Viana Palace you will be in a courtyard that reproduces the traditional Andalucian patio with many flower filled pots.

Some gardeners admit to me that they are overwhelmed by the grandeur of the Spanish gardens they visit.

“How can I possibly create a garden in Spain as good as those?” That is the question I hear most through my work. The answer is you cannot hope to compete with gardens such as the Generalife, which has developed over centuries. What you can do is tour the gardens of Andalucía and take plenty of time to admire what is on offer. Carry a notepad and pen with you. Write down the Latin names of those plants and flowers you admire. Consult an expert as to whether or not they will survive in your own space. Create a garden that suits the size of the area you have to play with. Do not try to be too ambitious. A garden to impress your friends and enjoy yourself can be constructed without spending a fortune.

I offer you one more tip for when you are touring public gardens in Spain. Have a pair of secateurs upon your person. They can prove to be very handy – but do not tell anyone I told you so!

Nola Lyttle is an experienced, creative gardener. She can be contacted at nolalyttle@hotmail.com 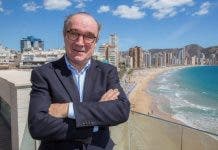