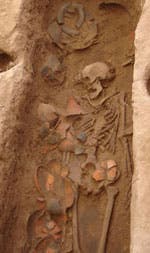 A HOUSING development is going ahead despite it being built on the site of a 15th century Moorish mausoleum.

A team of archaeologists uncovered the crypt during a preventative dig before construction work on the homes in Berja, Almería, begins.

In total, 112 bodies of adults and children believed to belong to two families were discovered in two separate tombs.

The discovery was made during an archaeological dig, a measure taken by the Junta de Andalucía before construction work on a housing development begins.

Although the regional government has given the site Grade 2 status, this is not sufficient to stop work on the planned development.

Instead, the remains will be removed and placed on public display in a museum.

“This is important for Berja. We need to conserve as many of these graves as possible to include them in the gardens of the future housing development,” Partido Popular mayor Antonio Torres said.

The decision to allow the development to go ahead has caused concern in the town. A spokesman for the PSOE opposition said the area in which the mausoleum was discovered must receive greater protection.

Roy Price, a Briton who has lived in the town for 20 years, also believes more should be done to preserve the heritage of the area.

“I have been to visit the site and was interested to see the graves carved out of rock with the remains of the bodies wrapped in shrouds. The site was left open for any one to walk over with human bones left scattered around.”

He then described his shock that construction work is being allowed to begin.

“I find it difficult to believe there is no interest in recording or preserving the heritage of the area. People tell me the government has no interest in this kind of thing,” he told the Olive Press.

The remains were found in niches in the wall, a form of burial typical in both Roman and Moorish Spain.

The bodies were buried in such a way that they were facing 45 degrees south east towards Mecca – an important pilgrimage site for Muslims.

Experts, however, cannot yet explain how one skeleton – that of an infant – was buried facing north west.

Primary tests on the remains have revealed the presence of arthritis and tuberculosis in the majority of the skeletons.

Some also show signs as bone cancer as the most likely cause of death.

The pelvis bone of the female remains show that they had given birth numerous times.

Berja, a town which dates to 1,000BC, is considered to be an area of great archaeological importance.

In addition to the mausoleum, recent years have seen the discovery of a Roman amphitheatre, Arab baths and various ceramic pieces predating the Roman occupation.

The most important archaeological discovery in the town was made in 1923, when a Paleochristian sarcophagus from the fourth century was uncovered.